> Resource Hub  / What is Shot Blasting?

What is Shot Blasting?

This process is a highly effective solution for the removal of contamination on metal substrates, changing the coarseness or smoothness of a surface, and providing surface preparation for coating. Force can be generated either centrifugally, using a wheel spinning at a high RPM or pneumatically, through compressed fluid or air.

Technically, shot blasting refers specifically to a process that uses spherical media and centrifugal force. However, shot blasting is also sometimes used more casually as a generic term to refer to a broader range of surface preparation activities, including grit blasting. 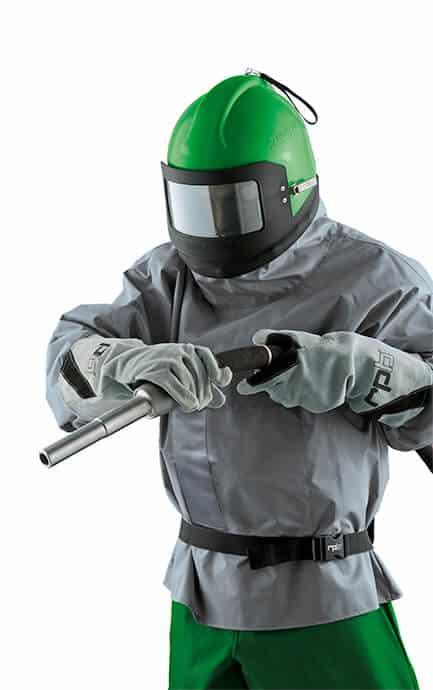 What is Blast Media?

“Media” is the common term used when describing the abrasive, which can come in many variations. When selecting media, it’s important to understand the effects of the grade (the size of the media), hardness (measured in Mohs), shape (spherical or angular), and mineral composition. Each of these qualities affects the finished surface profile, making media selection a crucial step in achieving the desired finish.

There are several types of media blasting, including grit blasting, wet abrasive blasting, bead blasting, and wheel blasting. Grit blasting is the general term for the process of cleaning or providing a profile on a hard surface by forcing solid particles across that surface at high speeds. The effect is like that of using sandpaper, although grit blasting provides a more even finish and is ultimately a much faster process.

Wet abrasive blasting utilises a mix of compressed air, water or water vapor, and media. Wet blasting is favoured for maritime and outdoor applications due to the cushioning effect of the water which reduces the amount of dust created. Wet blasting has a much slower cleaning action in comparison to air-only systems and can cause “flash rusting” on certain ferrous surfaces.

Bead blasting, also known as “shot peening”, is a process of using circular media to dimple the surface of an object. Shot peening is like grit blasting but works on the mechanism of plasticity rather than abrasion, which removes less material and generates less dust. Additionally, shot peening is used to relieve the tensile stress of metal and composites, increasing its compressive strength. This process is usually reserved for delicate machine components such as gear parts, suspension springs, and turbine blades.

Wheel blasting uses centrifugal force to propel media against a surface. A spinning wheel rotates at exceptional speeds to throw abrasive in a self-contained cage. Wheel blasting is often described as an airless blasting operation because of the lack of compressive propellant. It is a highly efficient form of surface preparation, that makes use of recyclable media for prolonged operation. However, this form of blasting lends itself to repeated shapes/products and is not as versatile as a booth designed for pneumatic blasting.

A variety of equipment is available for the various types of blasting discussed above. This includes hand cabinets, blast rooms, and portable blast pots. Mobile blast systems, or “blast pots” are compressor-fed, pneumatic machines, filled with abrasive material. They are a simplified version of the machines utilised in blast booths. The basic operator controls are media flow, pressure, and a dead man system.

Blast cabinets are small closed loop system designed for smaller component processing. Operating using only recyclable abrasive, the cabinet itself has four individual modules; the containment (cabinet), the abrasive recycling system, the blasting abrasive, and the dust collector. Separating the operator away from the cabinet are a set of media resistant gloves, which can be used to manipulate the hose inside and the material that is being processed. The cabinet also features a viewing port and foot pedal to control the blast exiting the nozzle inside. Blast cabinets can either work with a pressurised pot or a suction system which inducts media into an air stream and blasts at lower pressures.

Blast rooms are a much larger version of a blast cabinet used for heavy industrial applications. Operators need to be trained to work in these rooms. Inside, the operator roughens, smooths, or cleans the surfaces of an item, depending on the needs of the finish product. Blast rooms come in a range of sizes and can accommodate very large or uniquely shaped objects, such as rail cars, commercial or military vehicles, construction equipment, ship sections, and aircraft. Both cabinets and blast rooms can also be built to process large quantities of the same component automatically, using a conveyance system and additional nozzles.

Blast rooms have several key components, such as an enclosure or containment system – usually the room itself. This is sealed while blasting to prevent blast media from escaping. There is also a pneumatic blast system, or several systems, as described above. The blast system features a remote abrasive shut off and a dust collection system, which filters the air in the room and prevents particulate matter from escaping. It also has a media recycling or media reclamation system to collect abrasive blasting media, regrade it, and deliver it back to the blast machine for reuse. These reclamation systems come in various levels of complexity. The simplest type is filled manually and elevates the media to a hopper. The more complex type includes a full-floor recovery system that totally eradicates the need for manual recovery of blast media.

There are a large number of media types to consider when grit blasting and each has a different effect on the substrate they are used on. As you gain experience in the field of shot blasting, you will get to know the media types and the tasks they are commonly associated with. For example, some cannot be used on certain surfaces i.e., ferrous media on a nonferrous substrate. Certain media types are more aggressive than others. A number are favoured because they provide specific cosmetic finishes. Some are intended to relieve tensile stress, and others are suited to being reclaimed and used again.

Before blasting it is vital to consider the material you’re working with and the machine you’re using. Both factors will define the media you can use to complete the job without damaging the component in the process. For instance, when removing heavy corrosion on large steel ferrous sheets, a harder more aggressive aggregate such as chilled iron would be an appropriate choice for a blast booth.

However, when using a portable blast machine, copper slag would be a better choice as it is an expendable abrasive that cannot be reclaimed and reused. This makes it more cost effective than using a non-expendable abrasive in an portable blast setup. However, both chilled iron and copper slag can clean the material well and provide a great finish.

To find out more about blast media before purchasing, please get in touch with us via our Contact page.

Alternatively, visit our online shop and view our range of blast media and abrasives for sale.